Check the horizon, for word has been received that the nightmare of the longboat has been seen sailing down the coast. Feared by all, the Vikings would eventually land. Following these incursions around the shores of Loch Hourn and Loch Nevis – Garbh Chriochan, The Rough Bounds would become part of the Kingdom of the Isles, part of Norway.

For the next 400 years the MacRory’s, McDonald’s and the Clan Ranald would tussle over the right to be Lord of these isles. In actuality not until the mid 1700’s after the Bonnie Prince fled back to France did this part of Scotland begin to be integrated…!

The area earns its title of The Rough Bounds chiefly through the difficulty of access. Today, it is still an area that is difficult to access. Many of the isolated houses, crofts and small communities can only be reached either by boat or by foot over the mountains.

Those communities, underneath, still display allegiances to their ‘clan’..!

Formed by the watery boundaries of Loch Hourn ( Loch Shubhairne), Loch Nevis (Loch Nibheis ) and the Sound of Sleat (Sléibhte ). Minch Adventures aboard Cyfish and the Skipper Billy are uniquely placed to offer an informative view into the area through the sharing of its oral history. Using the boat to reach deeply into these fjiord like lochs allows an up close and personal experience of the sea, the mountains, the weather, wildlife and culture of the region.

Whether your interest is purely aesthetic, a wish to encounter wildlife at hand; or it is the fascinating history from the Lords of the Isles to 20thC influences from the likes of Arnisdale House, built for the father of Ian Flemming, the isolated beach of Camusfearna where Gavin Maxwell wrote ’The Ring of Brightwater’ and various locations used to train the men and women of the Special Operations Executive (SOE) during the Second World War.

You are sure to have an experience that will remain long in your memories.

As some of the visitors to the area may already know, Gavin Maxwell, author of several books including the three books beginning with Ring of Bright Water which comprise his autobiography, he lived here for some time following the Second World War. Something of Sandaig Bay and the surrounding area, where Maxwell’s house of Camusfeàrna used to stand, this must have arrested his imagination for he went on to immortalise the area several times over in his so-called “otter books.” Maxwell’s overriding passion seems to have been for otters; a great deal of Ring of Bright Water, the first and best part of the autobiography, recalls how, in 1956, following some time in Iraq, where had spent time roaming about the alluvial salt marshes, Maxwell brought back an otter to the Highlands. This relaxing day out with Minch Adventures aims to recapture some of the magic conveyed in Maxwell’s accounts of the area and to allow visitors to experience some of it for themselves, offering a day of landscapes, wildlife and Highland culture. The day out includes a boat trip to Sandaig itself, where there is the chance to swim in the bright waters of the bay, to comb along the beach at your leisure, or stretch out on the pebbles and listen to the plangent sound of the waves. Taking advantage of the relaxed pace of the day, we often take the chance at Sandaig to have a small picnic and barbeque, cooking either something we’ve brought or perhaps more excitingly, anything we’ve managed to catch in the bay off the side of the boat.

Though we have no great expanses of reed marshes, otters are a not uncommon sight in the estuaries, beaches and rivers of the area. There is also the chance to spot some when visiting the Maxwell memorial and on a walk that follows the river inland, through banks of sun shot woods, to a waterfall, which Maxwell called “perhaps the most enduring symbol of Camusfeàrna.” Of this waterfall Maxwell tells us “The sun reaches the waterfall for only a short time in the afternoon; it forms a rainbow over the leaping spray and at the top of the fall between the boulders it gives to the smooth-flowing unbroken water, the look of spun green glass.” As with a great many of the trips and cruises offered by Minch Adventures, we offer our visitors a wide range of possibilities, including the opportunity to enjoy some sea fishing at various locations and intriguingly to pull up creels for themselves, looking for crabs, lobsters and other crustaceans.   When the sun is shining this trip can be pure gold. 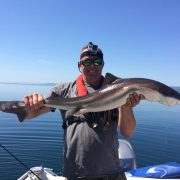 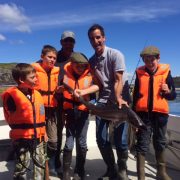 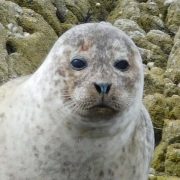 The start of the brown trout season has us venturing up into the lochans of the isle of Eigg, an Island formed from a volcanic eruption many millions of years ago….  The journey itself to these wild trout lochs is just as rewarding, the winding trail taking you to the foot of the well-known Sgurr and along its traverse with its unmatched views of the isle of Rum’s cuillin mountain range.

Looking down into the shallow lochs, the crystal-clear waters reveal it inhabitancy which are spooked easily so stealthy and cautious approach is the key to success if you are looking to hook into these splendid examples of wild brown trout. Fortuitously I hooked into a startled fish and landed from what I can only describe as my finest looking trout I have ever caught in the highlands of Scotland, our first recce to Eigg’s lochs has us planning several more visits due to us just scratching its surface… 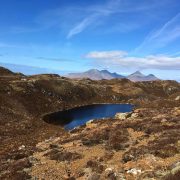 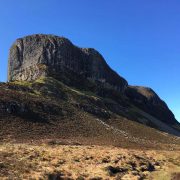 We are pleased to announce our new food addition to our trips – Luxury Seafood Lunches.

We have carefully selected the best quality produce from local fishermen and business to provide a luxury lunch on selected private trips, on request.

The Lunch which is generally served after a short remote hike and mainly consists of creel caught langoustines, hot & cold smoked salmon, a selection of Scottish cheeses, mackerel pate and oatcakes, all washed down with a lovely bottle of white wine. 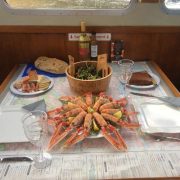 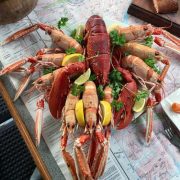 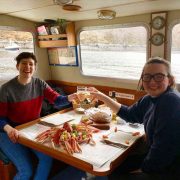 Back in 2016 we created this off-piste, specialized and individual biking locations on the Knoydart peninsula that is accessible only by boat, providing a strategic drop-off point and pick-up on the remotest location.

Mountain Biking trips involve a remote drop-off at Camusrory on the north shore of Loch Nevis, where a land rover track will lead you into the Rough Bounds of Knoydart and to paths that are overshadowed by the soaring peak of Sgurr na Ciche. This is where the adventure truly begins! After 550m hike-a-bike section up deer-stalking paths, we work our way down through flowing descents, along technical rock features, riding through undulating craggy landscapes and winding across the granite spines of the hills, while all the while your adventure continues to unfurl before you. The day’s off-roading is finished with a meandering single and double track that will lead us back to the remotest pub in Britain, The Old Forge or, alternatively, The Knoydart pottery & Tea room for local craic and refreshments.  Visitors can also Camp out under the stars or stay at selected accommodation providers on Knoydart. These places provide a warm and lovely place to rest after your wild trip with Minch Adventures as well as some great places to dine in the evenings, such as Doune Restaurant or River Cottage.

This trip is a pet project of Bill’s and it is only made possible by his love of mountain biking and his passion for delivering adventure in the remote areas of Knoydart. His Mountain Biking trips give would-be explorers a wholly unique way to experience the area, cutting deep into the heart of this West Highland wilderness; if it is rough adventures that you’re looking for, you will not be disappointed! Best trail conditions are from late April to early June.

Fishing at loch Scavaig with time a shore on Coruisk at the foot of the Cullin mountain range on the Isle of Skye is a new trip we have on offer.

Great opportunities to catch larger fish when tides are suitable, when the weather is in our favour this is an excellent trip and not to be missed. Skye offers stunning scenery from which we never tire from even after 30 year working on the water as a fisherman and now on our charter vessel Cyfish. 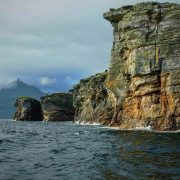 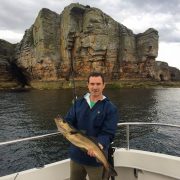 Pick up on the south shores of Loch Nevis for walkers that have made their way from Bracarina along the shores of the Loch Morar to Tarbet walkers trail.

Loch Morar is the deepest freshwater loch in Britain and is home to Morag the monster the cousin of Nessie the loch Ness Monster.

These are returning visitors for the 3rd season running, and I want to make it special, so I hire a local musician Lachie Robinson to accompany us. Lachie plays a few tunes on his banjo and guitar for which he has composed his own songs. This creative thinking goes down a treat.

Lunch at the Old Forge in Knoydart followed by some more tunes from Lachie then it’s a gentle cruise back to Mallaig with a spot of wildlife watching along the way.

On a slow adventure trip to the Isle of Rum sea conditions were far from perfect, fresh southerly winds with consistent rain has me wondering if this was the right call but we are excited to show our Texas guests this beautiful wild island. Having organised a wildlife ranger tour of Kinloch harbour which gives us shelter from the elements, we then had a quick stop off for refreshments at the tearoom. Its then into the jeeps for a trip to Harris bay on the west side of the island.

On the steady climb up Kinloch Glen the rain stops and the mist lifts to reveal the dramatic Rum Cullin with the large red deer population peppered on the slopes. The guests are in awe with this wild land and fully appreciate the fact that we are all alone. As we pass the lochs on our left the men in the group are eager to fish, I nudge them on pointing into the west to Harris Bay. On arrival at Harris Bay, stunning, beautiful and remarkable are just some of the comments spoken out loud. There is no sign of the wild ponies but there is an array of sea birds, wild goats and highland cattle surrounding the mausoleum which looks like it belongs in ancient Greece and not the Scottish Highlands.

The return leg has us fishing in what I call ”trout fisherman’s heaven” Loch An Dornabach, we take a brace of buttercup coloured trout back to Kinloch to BBQ while meeting some local characters who share some ales and play a few tunes on the guitar. The company is good, the craic is flowing and the time just disappears, its 8.30pm and its time to go I’m afraid, heading back to Knoydart with the sun setting behind us we can agree it was the perfect immersion into a Highland culture delivered to our Texas guests.

Get in touch about a private hire 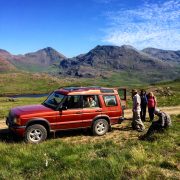 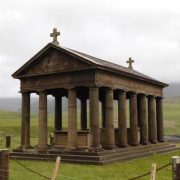